This is a site dedicated to Music in all forms.

Be it vinyl and valves, cd, solid state or computer based. There are a lot of ways to get there.

I believe music has had a large impact on me, and is very important to many many people for a million different reasons. From that first single you bought, to the track you listened to 10 minutes ago, you listen because it brings you pleasure. Or escape from the day to day. Or sends you to a place in the past and stirs up memories of good times.
It can bring back memories of people and places in the same way as a photograph can, and when you close your eyes you can see and feel that place, that person, that event.
Its a beautiful thing in whatever form it takes.

However you choose to hear it, on your Ipod while walking to work, in the evening in your favourite chair with the lights dimmed, on the radio in the car, it doesnt matter. Just listen and enjoy

My ever evolving system 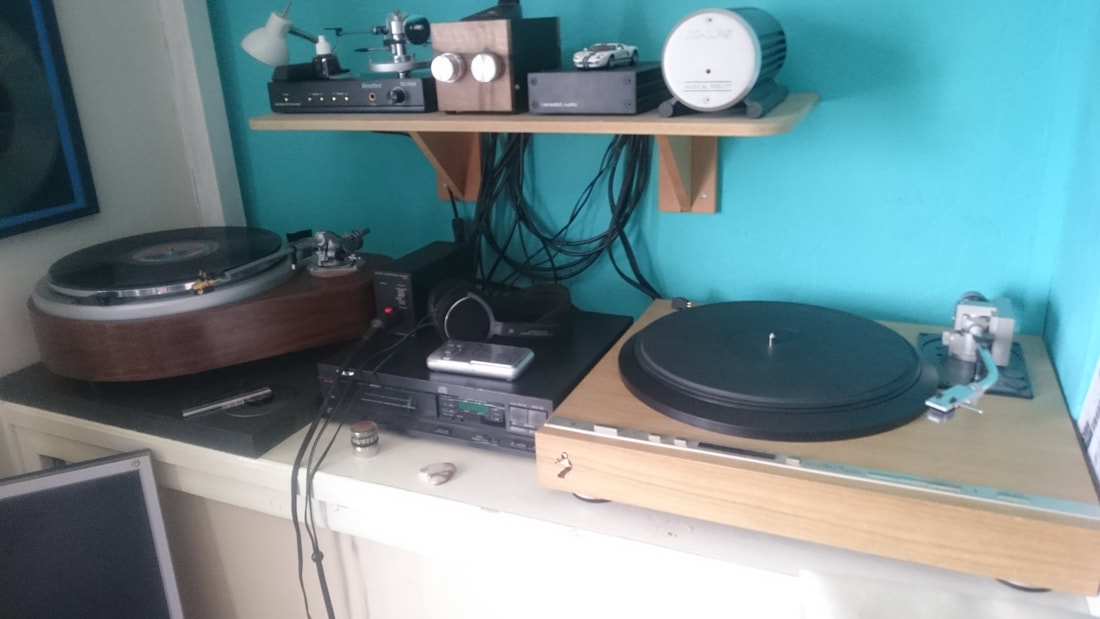 My system is an odd mix of the old and new, and gives me a very nice sound for what it is. It changes slowly, evolves if you like. Same as most peoples.
Firstly the sources.

There is a 1985 vintage Philips CD371 cd player. It uses the now legendary TDA 1541 dac and CDM 2 transport. The die cast drawer mechanism and milled resin laser unit give it a great solidity, the transport is built like a tank. better than the 2/10 with its crappy plastic drawer. An unassuming little unit that is midi sized and fits nicely into the limited space available. Not the last word in fidelity, it does however make a sweet and musical noise. There are more tweaks and tricks to upgrade the player if I feel the need, and it has a pair of Motorola op amps on the output, and a set of Nichicon muse greens for the output caps. Plus a recapped power supply. Can't say I've felt the need to alter it further so far.

Second source we have is a mac mini running itunes or vox with about 7000 tracks on it. This runs into a Beresford tc7510. Makes a nice enough noise if I want to just stick it on random and have it on in the background like a jukebox. If that sounds like I don't like it, not so, I just can't get excited by it. For me computer audio serves a purpose, but I don't really care too much how it sounds.

Third are the turntables. Now these I can and do get excited by. First is one of my Lenco's. Built as a demonstrator, it's running an Audio Technica AT1100 low mass arm, and an Audio Technica high compliance(ish, when corrected for 10hz the compliance figure is roughly between 17 and 20) AT150 sa cart. Iv'e gone back to MM carts after about 15 years of MC's and to me the Audio Technica is a lovely musical thing. Shibata stylus, tracks like you wouldn't believe, and absolutely no distortion at all. End of side distortion begone! Which was all sadly lacking with some of the mc carts I had previously. With this combo I have found what I have been looking for for all these years.
The second deck is the JVC QL-Y5F I restored. The intention was to sell it once it was done, but She Who Must Be Obeyed put paid to that. Its become her deck. It gets used for several hours every day. Its running an Audio Technica AT440 mlb moving magnet, and although the combo isn't quite as good as the Lenco, is very very good in its own right. and swmbo, is happy, so who am I to rock the boat.....

The Phono stage is a Benedict Audio hothead JFET mm stage with zero feedback. The only thing I would consider replacing it with is a Cole LCR phono stage which is just astonishing. The original Cole was designed by a certain Thoresten Loesch, which explains things...... The musical fidelity in the picture is no longer in use, as I made a small switch box to allow both decks to use the same stage.
If I want to sit down and listen in the evening, and actually listen, Vinyl is the source I choose. Both decks gives a very musical performance, letting out the emotion of a piece of music rather than laying it all out in a clinical detached manner.

Next the amp.  This is a Nelson Pass F5 amp I took as part payment for work on another Lenco conversion (there are 7 in existence now!) This one was built by Nick Gorham of Longdog Audio and is a fully dual mono version. It puts a little more power out than standard at 28wpc and is an absolute stunner. These amps are something very special. If you can get a listen to one, or get one built then do it. They are to me, one of the best sand amps I have ever heard. Of course I haven't heard everything, but I have heard Nicks LDA p6 amps. Which are even better. my el34 is gathering yet more dust and will be for the forseeable future. An absolute cracker of an amp. Mr Pass can't half design an amp

There is a passive pre controlling it all in this photo, using an ancient alps carbon track pot that was pulled out of an early seventies tape deck. A dual concentric pot that gives balance control. I scragged that one up just so I had something to use myself, and it stayed until my dad mentioned he wanted something with a balance control. So he has it now, and I have one I built using a Khozmo shunt stepped attenuator.  Sometimes old school is cool.


The speakers are a pair of prototype 2 way metronomes using a faital 6" pro driver and an sb acoustics tweeter. Crossovers are on the floor next to them, connected up with clip leads. Not the best way to do things, but hey ho, I cant be bothered to do it properly right now. Edit: I have got off my arse and put the crossovers in boxes now, and covered the speakers in cream suede material so swmbo left me alone about the grubby bare cabinets. Much better.

All is fed from the balanced power supply I built.

cables are........god knows what. I think there are some NVA sound cords I borrowed because I needed some more, and the rest are what I had lying around. Same for the speaker cables. I think someone gave me them, and I haven't a clue what they are. Not that I don't care what they are, I just have better things to do with my time than worry about cables.

My way of thinking when it comes to audio has morphed and changed over the years. From the audiophile faff, tweak, prat about with acessories, cables, upgrade, spend more money on it pattern, to build it yourself, and now to chasing the music rather than the system. I try to give things a try first before dismissing them. Too often people let others tell them what is good and what isn't rather than using their ear'oles to decide for themselves. You are the one who will live with a system, not the bloke in the pub, or the guy on the forum, or the man in the suit in a showroom.

Every now and then I find it's good to take a punt on something, or take a break from chasing the ultimate sound and just base a hifi choice on wether you enjoy it or not. Who cares wether it sounds coloured, or lacks the nth degree of detail, air, space, whatever other cliche the rags like to publish you care to shake at it. Accept it. While you are playing air drums along with Dave Grohl, out jamming Hendrix with your invisible strat, running up that hill with Kate Bush, or out wayning Wayne along with bohemian rhapsody, you are happy.

I got fed up sitting there listening critically, picking fault and wishing I had that new ten grand amp, that way lies audiophillia and I don't want to go there any more.

I just want to enjoy the music.

Isn't that what its all about?